Heads up, there may be fresher snow! Read the latest British Columbia Daily Snow 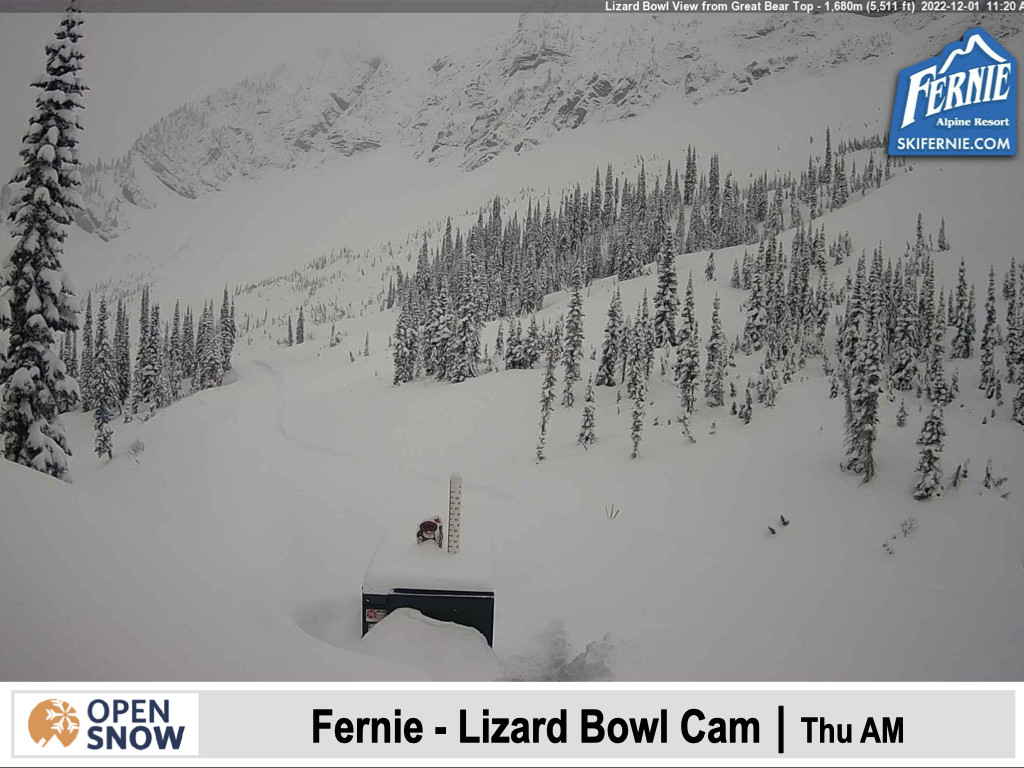 Snowfall from our midweek storm is winding down with the deepest totals coming in across the Coast Range, Okanagan Region, and Southern Powder Highway. Fernie will see some lingering snow showers Thursday, while all other areas dry out. A weak storm will deliver a glancing blow on Friday PM with Vancouver Island & the North Shore being most favored. After that, a break will occur from Sun to Tue.

Snow continued across the Interior on Wednesday, favoring the Southern Powder Highway region, while snow ended sooner than I expected around Revelstoke. Here are the updated storm snowfall totals from Tuesday AM through Thursday AM:

The only area still seeing snow on Thursday is the southeast corner of BC, including the Lizard Range and Fernie. This area is right on the northern fringe of lingering moisture, though, so I'm expecting additional totals to be on the light side, perhaps another 5 cm or so.

Conditions are looking quite good at Fernie, however, with opening day just two days away (Saturday, Dec 3). 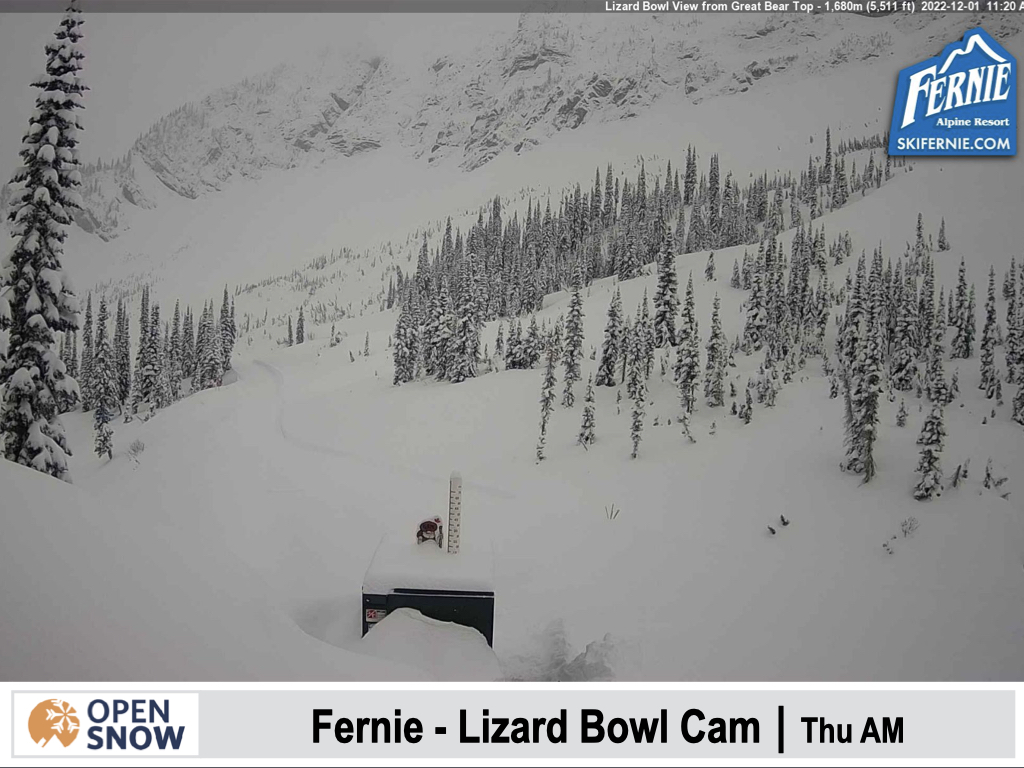 Dry conditions will take hold across the rest of BC on Thursday. Cold temperatures will help to preserve the recent snow with soft conditions expected.

Following a dry start to the day on Friday, the next storm will deliver a glancing blow to Southern BC from Friday afternoon through Friday night.

The storm will feature a center of low pressure well of the coast that will be moving southward toward California. A surge of moisture will move into Southwest BC briefly on Friday night, providing a round of snow that will favor the North Shore Mountains. Whistler will be right on the northern fringe with only light snow expected.

The Southern Interior (Apex to Big White to Red to Fernie) will also be right on the fringe, and even short-range models are struggling to handle this, with some models projecting enough moisture to reach these areas for light snow, while other models are keeping conditions completely dry. Further north, Revelstoke and Rogers Pass will almost certainly stay dry.

For snow totals, I'll go with 5-15 cm (2-6") across the North Shore Mountains and a trace to 5 cm (trace-2") for Whistler, Coquihalla Pass, and Manning Park. Snow levels will stay low in this storm, ranging from sea level to 300 meters.

Further west, snowfall will be much heavier over Vancouver Island before the storm tracks southward. Mt. Washington looks like it will be the winner as far as ski areas go with this storm, where I expect 15-30 cm (6-12") to accumulate. Across the Southern Interior, if any snow falls it will be light, ranging from a trace to 5 cm. 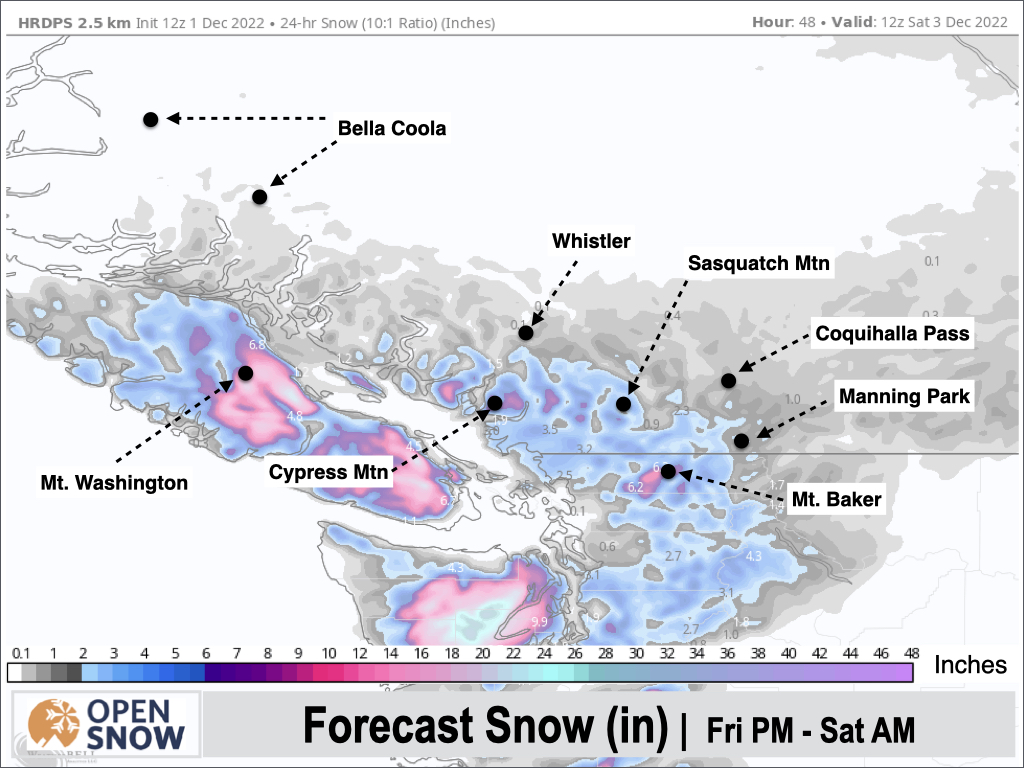 Snow from this storm will be coming to an end by Saturday morning. We can expect clearing skies and somewhat warmer (but still chilly) temperatures across the Coast Range and Southern Interior, while areas further north toward Revelstoke and Kicking Horse will remain very cold as arctic air stays locked into place.

I'm now expecting a generally dry pattern to continue from Sunday (Dec 4) through Tuesday (Dec 6). The only possible exception will be a weak storm sliding into the Canadian Rockies from the northwest during the 4th-5th timeframe.

Most of the snow with this storm should remain on the eastern side of the Continental Divide in Alberta, but I couldn't rule out some flurries across Eastern BC.

Otherwise, temperatures will remain very cold across the BC Interior from Dec 4th-6th (highs -10 to -15ºC) while the Coast Range of Southwest BC will see milder temps (highs -5 to +5ºC).

After that, the next storm is projected to arrive around Wednesday (Dec 7) or Thursday (Dec 8). I'm seeing some hints of a possible storm around the weekend of December 10th-11th as well, though confidence is low.

Temperatures will remain on the colder side of average through about December 9th, then we could see some warmer air reach Southwest BC around the 10th-11th, which means we may have to start paying attention to snow levels again over the Coast Range.

Thanks so much for reading! Next update on Friday (Dec 2).

Alan Smith
Meteorologist
Alan Smith received a B.S. in Meteorology from Metropolitan State University of Denver and has been working in the private sector since 2013. When he’s not watching the weather from the office, Alan loves to spend time outdoors skiing, hiking, and mountain biking, and of course keeping an eye on the sky for weather changes while recreating.
Read More